Annual Lecture: The Making of an Alliance The Roots and History of Israel-US Special Relations

On 21 November 2019, the 'Theodor Herzl' Centre of Israeli Studies hosted the Annual Lecture 'The Making of an Alliance: The Roots and History of Israel-US Special Relations'. The lecture was delivered by Prof. PhD. David Tal (Sussex University). Professor Tal specialized in Israel’s military and diplomatic history and US nuclear disarmament policy. He authored four books and edited two. His most recent authored book is US Strategic Arms Policy in the Cold War: Negotiation and Confrontation over SALT, 1969-79, (London: Routledge, 2017). He published about 40 articles and book chapters in the major journals pertinent to Israel’s military and diplomatic history and US foreign policy. His present project is the history of US-Israel special relationship from the early 20th century to the present. Cambridge University Press will publish the book.

In the audience - among representatives from the Romanian Ministry of Foreign Affairs and the Embassy of Israel in Romania - were present more than 50 students from different degree programs of the National University of Political Studies and Public Administration.

The event was organised together with the support of the National University of Political Studies and Public Administration (SNSPA) and the European Association of Israel Studies. 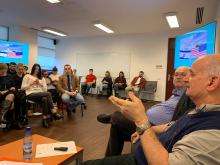 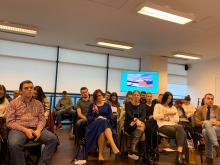