On 22nd-23rd of May 2018, the Center for Israeli Studies (CISs) from the National University of  Political Studies and Public Administration (SNSPA) organized the conference “Policy of Culture and Memory in Israel”. The lecturers are members of the academic communities from Romania, Israel, the United Kingdom, the Czech Republic and Poland as well as professionals in the fields of media and culture.

The second session was opened by Aaron T. Walter, Adjunct Professor, Masaryk University, Faculty of Social Studies; Department of International Relations and European Studies, Brno, Czech Republic, “Friend, and Ally: Case study of Czechoslovak and Israeli cultural identity through nation-building”, followed by Ana Maria Bolborici, Department of Sociology and Communication, Transilvania University of Brașov, Romania,“Perspectives on the Israeli-Jewish collective memory and the Israeli-Palestinian conflict”; Ewa Wegrzyn, Institute of Jewish Studies, Jagellonian University, Krakow, Poland, ” The Immigration of Polish Jews to Israel after the Second World War and the Cultivation of Polishness in the New Homeland”. 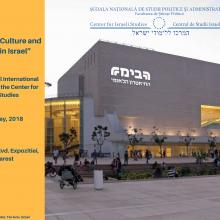